An introduction to Inkscape for absolute beginners 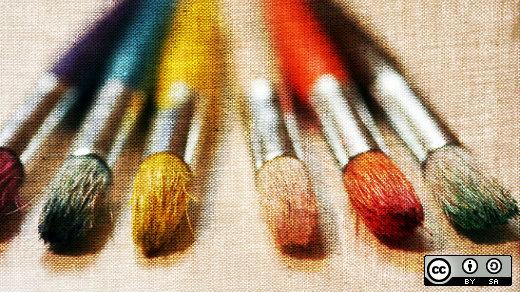 Inkscape is a powerful, open source desktop application for creating two-dimensional scalable vector graphics. Although it's primarily an illustration tool, Inkscape is used for a wide range of computer graphic tasks.

The variety of what can be done with Inkscape is vast and sometimes surprising. It is used to make diagrams, logos, programmatic marketing materials, web graphics, and even for paper scrapbooking. People also draw game sprites, produce banners, posters, and brochures. Others use Inkscape to draft web design mockups, detail layouts for printed circuit boards, or produce outline files to send to laser cutting equipment.

Common file formats for raster graphics include JPG, PNG, BMP, and TIF. Digital photographs are generally born as raster images, and it's best to edit them in a raster graphics tool, such as GIMP or darktable. However, importing raster graphics into Inkscape for use within a larger vector graphic project is possible, either by linking it or by embedding it directly into the file.

The main advantages of using vector over raster graphics come down to scalability and file size, but the vector approach won't suit every use case.

The SVG format that Inkscape uses as its native file format can be opened by almost any other vector graphics tool and can also be viewed by all modern web browsers, which means SVG is increasingly being used on the web and in other kinds of digital design.

A tool to unleash creativity

Like programming or writing, drawing is a skill that lets people express ideas. From rough sketches to famous works of art, drawing can be a pure manifestation of imagination or a way to represent reality from our own unique perspective.

Inkscape gives us all an unlimited canvas of potential. Our powers of creation are limited only by the skill with which we tame our tools. If we work on building a basic familiarity with the tools available and practice using them, we can unleash the power of Inkscape for a huge range of graphic communication projects.

If you're ready to use Inkscape, here are links and resources that can help.

Inkscape is available under the GPL open source license and the project is a member of the Software Freedom Conservancy.

A small and changing team of core developers has been building Inkscape since 2003 when the codebase was forked from SodiPodi, which in itself was a fork of GILL, the GNOME Illustration Application created by Raph Levien. The Inkscape website invites people to get involved and outlines a number of different ways people can participate, such as writing the code itself, to helping with the website, to working on documentation, producing example graphics, creating tutorials, and generally helping to promote Inkscape wherever and however possible.